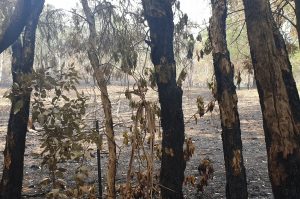 In early January, the leader of the Opposition, Anthony Albanese, suggested the first sitting day of Federal Parliament for 2020 be devoted to marking the unprecedented bushfire crisis. That got me thinking about Australia Day.

Why not make it a day of mourning, not just for Indigenous Australians as it explicitly became on 26 January 1938 but for all those heartbroken by the devastation that has swept our land.

26 January 1938 marked the 150th anniversary of the landing of the First Fleet in Australia. On that day a group of Aboriginal men and women gathered at Australian Hall in Sydney. They moved this resolution:

“WE, representing THE ABORIGINES OF AUSTRALIA, assembled in conference at the Australian Hall, Sydney, on the 26th day of January, 1938, this being the 150th Anniversary of the Whiteman’s seizure of our country, HEREBY MAKE PROTEST against the callous treatment of our people by the whitemen during the past 150 years, AND WE APPEAL to the Australian nation of today to make new laws for the education and care of Aborigines, we ask for a new policy which will raise our people TO FULL CITIZEN STATUS and EQUALITY WITHIN THE COMMUNITY.”

After the phrase ‘callous treatment of our people’, that resolution might have carried the words ‘negligent care of our country’. In 2019/2020, that negligence has had horrific consequences.

White people have not been good at heeding advice about the treatment of this ancient land and its first peoples. Before he embarked on the Endeavour expedition in 1768, James Cook, whose arrival on Australia’s east coat 250 years ago will be widely commemorated this year, received a set of ‘hints’ from the president of The Royal Society, James Douglas, 14th Earl of Morton. Lord Morton exhorted Cook to remind the crew it was their moral responsibility to do no harm to the Indigenous inhabitants and to respect Indigenous land occupation. The British Admiralty also instructed Cook only to take possession of advantageous positions with the ‘Consent of the Natives’. Cook proceeded without any such consent.

Kevin Tolhurst, whose name became so familiar during the 2009 Victorian Bushfires Royal Commission, has pointed out that, after 57 formal public inquiries, reviews and royal commissions related to bushfires and fire management since 1939, we have also had plenty of advice about bushfire management. The problem lies more with implementing the findings from these reviews. One lesson from the Black Saturday tragedy is that ‘stay and defend’ is often not the best course of action. The ‘leave and live’ option has saved lives this bushfire season.

Other recommendations have not been adequately followed up. In 2012, the Council of Australian Governments signed off on a national policy, which listed 14 national goals. One of those was to ‘further integrate traditional burning practices and fire regimes with current practices and technologies to enhance bushfire mitigation and management in Australian landscapes’. This goal recognised the benefits of widespread, low-intensity, patchy fires across the landscape as a way to build resilience to climate extremes.