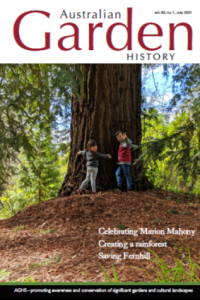 In this issue of Australian Garden History, the array of images expands many fold the word limits necessarily imposed on contributors. Photographs of NSW’s sweeping high country and its tell-tale flora reinforce the point made by Warren Foster, a proud Yuin man, that evidence Aboriginal gardens have been around for millennia is right before our eyes.

Capturing the entirety of a Californian redwood in a single image is nigh impossible. Gillian Jenkinson’s photograph of part of the sequoia on the front cover conveys the marvel these giants evoke. Her husband, Jeff Jenkinson, tells the story of South Australia’s Champion Tree in the Adelaide Hills.

Thanks go to the Royal Botanic Gardens Victoria for the magnificent images of the new Arid Garden in the Melbourne Gardens, whose cacti have a 100-year-old story.

Andrea Whitely, a Perth-based garden consultant and writer, tells the history of a Subiaco rose garden. The current owner of the property, Fairview, Thomas Murrell, is preserving the history of his house and garden, including in artworks he has commissioned.

Other images inspired by history are the exquisite botanical drawings created to mark the 250th anniversary in 2020 of Captain Cook’s voyage in the Endeavour. These will be on show in a free exhibition from 21 August to 12 September, 10am to 4pm, at the Lion Gate Lodge in the Royal Botanic Garden Sydney.

This issue introduces two professionals working in the world of gardens, both of whom see the value of understanding history and preserving traditional methods. James Boxhall is the only Australian accredited by the National Hedgelaying Society in the United Kingdom; Ian Carroll is the head gardener at one of the Southern Highlands of NSW’s oldest gardens: Oldbury Farm.

The mission of the Australian Garden History Society is to promote awareness and conservation of significant gardens and cultural landscapes. It is pleasing then to see that one of those gardens at Yarrabin in Bowral, NSW, has escaped demolition. The story of the house and garden appear in the journal’s occasional series, Remarkable Gardens.