Here’s an article from The Spectator about the plural of ‘referendum’ being ‘referendums’. I agree.

We didn’t adopt Latin grammar ‘holus bolus’ (that’s an archaic term from North America), so shouldn’t be imposing rules that apply to Latin but sound silly in English. The split infinitive is a case in point. The rule works for Latin verbs but is not necessary for English. If ‘to boldly go’ sounds better than ‘to go boldly’, split that infinitive (‘to go’). Here’s what the Oxford Dictionary people have to say on the matter.

Back to referendums: in this case, Dot Wordsworth in The Specator argues that even according to Latin rules there can be no referenda. 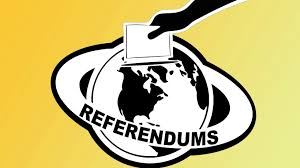