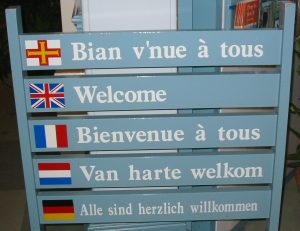 On 27 April 2016 I attended a public hearing of the House of Representative’s Standing Committee on Education and Employment. It was part of the committee’s inquiry into innovation and creativity: workforce for the new economy . When I introduced myself as, inter alia, a former diplomat, I was greeted with a German ‘sehr gut’ and Russian ‘здравствуйте’! That was heartening though unfortunately we didn’t get to talking about languages, which I argue are part of the skills our workforce needs. Without them, monolingual Australians will be less competitive in the global market place.

As the Economist noted in 2014: ‘Oil economies aside, the top 10 [richest economies] includes countries where trilingualism is typical, like Luxembourg, Switzerland and Singapore, and small countries like the Scandinavian ones, where English knowledge is excellent.’  The article quotes a  Cardiff Business School study, which estimated the lack of foreign-language proficiency in Britain costs the economy £48 billion  or 3.5% of GDP each year.

In a more recent column in the same publication Johnson (a must-read for anyone interested in language) shows that those who negotiate in a foreign language gain added advantages because they think in a more utilitarian, less emotional way. They can also confer privately in their own language. Moreover, using another language is reminder that we don’t all see the world the same way, no bad thing when you are wanting to close a deal.

Cultural diversity and understanding  are becoming valued as an important part of any organisational structure, not just in businesses working in the international arena. In Australia, 16.7 per cent of Australian workers identify as Asian. Yet, according to the Diversity Council of Australia, only 17 per cent of people with Asian backgrounds strongly agree that their organisation uses their Asia capabilities very well.

So an easy step toward  increasing our ability to engage with Asia is to take much more advantage of the talent we have among those with Asian heritage. But that shouldn’t be an excuse for native English speakers to rest on their laurels. Yet, when it comes to Chinese language that certainly seems to be what’s happening. Dr Jane Orton writes that the current number of proficient adult speakers of Chinese in Australia of non-Chinese background is estimated to be 130 at most; and half of those are already over 55 years of age. In 2015 there were just 400 year 12 students of Chinese as a second language. (See also Orton’s  Building Chinese Language Capacity in Australia just published by the Australia-China Relations Institute.)

Goodness knows how we are going to greet the two million visitors the government hopes will come to Australia during the 2017 Australia-China Year of Tourism!

Oh, and if the economics of this don’t matter so much to you, remember: learning a language is good for brain function too.