Russia and Ukraine: we must strive for talks 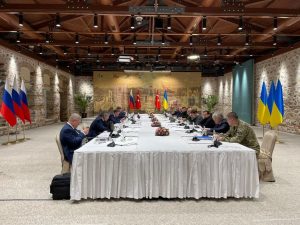 I wrote a piece this week, explaining why I grieve for Russia and for diplomacy: I grieve for Russia, which is not the same as Putin – Pearls and Irritations (johnmenadue.com) I argue that the West is complicit in this carnage, not striving for dialogue, for negotiation, for understanding. In Australia, I grieve for the decline in journalism, including the TV and radio coverage of the invasion. Bringing us harrowing images and voices of Ukrainian victims is an important part of the story but we also need analysis and explanation, facts to help us decide whether sending Bushmaster 4WDs and money for weapons is the best way to help those individuals now fleeing or living in the bombed wreckage of their homes.

In the article, I discuss Putin’s attitudes to Russia’s place in the world and his ideas of a strong state. I do not condone his authoritarianism but do argue the ‘West’ had many chances to work with his government. Instead it dismissed his security concerns and carried on with a kind of Cold War triumphalism.

I also referred to Putin as mad. I certainly think that what is now happening is irrational and fear we will now see further escalation of the fighting, even a declaration of war on 9 May. Since using the word ‘mad’ I have read this piece by Anatol Lieven titled, Reckless and ruthless? Yes. But is Putin insane? No. Lieven is a senior research fellow on Russia and Europe at the Quincy Institute for Responsible Statecraft. He knows Russia well. In the article, he argues that declaring someone irrational leads to a place in which no one wants to negotiate, because, no one wants to talk to crazy people.

Whether Putin is clinically deranged or ‘just’ becoming increasingly reckless. the point remains, the world must not abandon diplomacy.