Stories from the front: art reveals more than news about the ravages of war 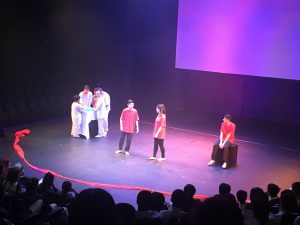 Australia’s handling of the global refugee crisis confounds me. I cannot fathom how a nation of immigrants can be so manipulated by our politicians. They stir up artificial fears, pathetic fears when compared to the terror that compels people to flee their homes.

Facts and more facts about the horrors in Syria, the plight of the Rohingyas, the misery on Manus and Nauru can act as an anaesthetic. Art, on the other hand, can revive the senses.

That was my experience at Gardens Speak by Tania El Khoury, which I visited during the 2017 Adelaide Festival. Come with me to those gardens. First, enter the bleached forecourt of the tumble-down Queen’s Theatre, the oldest in the city. It appears abandoned. Is this the right place for the performance? A girl in the cool, dim foyer tells us someone will fetch us soon. Another willowy volunteer appears to lead us and ten others into a high-ceilinged barn of a building, alongside the theatre. As instructed, we take off our shoes, we put on disposable rain coats. What’s going on? We are handed a card with the name of someone who has died. It’s in Arabic. Our usher explains that Syrians bury their dead quickly. In wartime, it can be impossible to get to a cemetery for a funeral or to visit a grave. So, people are put in the ground at home, sometimes under a favourite tree, still close.

Our group is guided through heavy plastic curtains to a darkened part of this cavernous space. Twelve mounds of soil are arranged in two rows, each with a stake where a name is written. Using our cards to guide us, we find ‘our’ grave. We have to dig around in the dirt. One woman disturbs the solemnity, exclaiming concern for her jewellery. We are looking for a buried speaker. The volume is low so there is no choice but to lie on the mound with an ear to the microphone to be able to hear a story about war and dislocation, of fear and anger. Not all these people are innocents. My person – I confess, I have forgotten his name – tried to stay out of the conflict until it got too close. His own family members were killed. He entered the fray. He was shot.

It is not comfortable lying in the dirt, clean though it may be. Its earthiness and the intimacy of the listening and the gloom add a visceral perspective to the news we hear about Syria. But let’s not kid ourselves; we are still perfectly safe and soon we’ll be able to go for a cleansing ale. Our final instruction comes as we return to the vestibule to remove the coats and retrieve our shoes. We are given pencil and paper and invited to write to the relatives of the person we met on the other side, of the plastic sheet. Who knows if anyone ever received those letters. If they did, what did they think? Did they feel, just for a moment, a little less abandoned, a little more part of the whole human race?

A few weeks ago I went to another performance. Much less sophisticated, still raw. Suitcase Stories are vignettes written and performed by teenage refugees now living in Sydney. First, the actors offer us their childhood memories of accidents and illnesses and awkward moments. These lull us with their familiarity about our own lives. Who doesn’t know a child carrying a scar from a toddler mishap? Soon we are in new territory, where ISIS and soldiers, landmines and bombs shatter families, produce demons and desperation. All this is mimed by the group, dressed in plain red T-shirts and leggings. Crates act as the only props, turning from cars and tractors into beds where sleep is hard. Instead of counting sheep to help her nod off, one girl counts missiles, 429, 430, 431.

These are grim stories, some better written and spoken than others — English is a new language, a second, third even fourth tongue.  Amanda tells of the Tuesday she went to the hairdresser.  She was delighted by the result. As she preens, a bomb goes off. Hundreds are killed in the busy marketplace. ‘It was supposed to be an ordinary Tuesday afternoon.’

Anabella can’t act out her own story. Mariam takes her place. She’s at her uncle’s house. The phone rings. Something has happened. No-one will tell her what. She goes into the street where she overhears two people talking. That’s how she learns her father has been murdered. These are, we are reminded, true stories.

Finally and urgently these families flee; some must leave everything behind to escape the danger. They are now in Australia. In unison, the teenagers tell us they like Australia because they are safe, away from fear. Well nearly. In one of the final scenes Shukrullah and Saltanat discover a new enemy, a magpie, who swoops them daily as they walk to school. Kifarkis plays the magpie. He has a future on the stage.

Suitcase Stories is a production by Treehouse Theatre in Sydney. The theatre provides a platform for young refugees to share their life stories.

6 shares
Tags:war
previousWhat do we mean by Australia Day?
nextWhy we have diplomatic language

1 thought on “Stories from the front: art reveals more than news about the ravages of war”