Will we ever be satisfied with less? 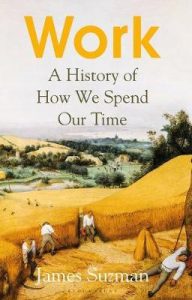 I can’t imagine the old normal returning unaltered after COVID-19 but worry that the rush towards a new normal will entail too much focus on growth and profits and not enough on caring for the vulnerable and the environment. If that happens, we will have squandered an opportunity to reset how we value health, work and leisure.

Anthropologist James Suzman has written a history of work that gives us plenty to consider as we navigate our way out of the pandemic towards that new normal. Here’s my review (which first appeared in The Weekend Australian 19-20 September) of Work: A History of How We Spend Our Time, published by Bloomsbury.

Why, in an era of unprecedented abundance, are we preoccupied with scarcity and therefore aspire to more and more growth? Anthropologist Suzman employs the second law of thermodynamics, also known as the law of entropy, to answer this question. His idea is that entropy – the energy not available to do useful work, like the steam that escapes from an engine – ‘unpicks whatever order the universe creates’. Entropy, Suzman argues, has ‘driven humans to direct energy surplus into something purposeful’. This is the book’s leitmotif but repetition does not make the concept easier to grasp. Nevertheless, most of this history of work is accessible and thought-provoking.

To explain contemporary attitudes to work, Suzman traces the convergence of the way humans use energy with our evolutionary and cultural history. After the hunter-gatherers, whom Suzman knows well from his work with the Ju/’hoansi bushmen of eastern Namibia, came mastery of fire. This began a process of capturing energy that has changed the way people live, produce and value time. I found the chapters about early human endeavour the most interesting and enlightening. They lead to the proposition that, after fire, farming (which triggered population growth) and then the exploitation of fossil fuels in the Industrial Revolution have had dramatic effects on work, society and the climate.

What Suzman admires about the Ju/’hoansi is their satisfaction with just the resources available to nourish them. He appreciates their bewilderment at the notion of scarcity, which now drives the pursuit of growth in modern economies, although he also acknowledges that, for subsistence farming societies, scarcity was often a matter of life and death. His critique is that when ‘hardly any of us now produce our own food, … the sanctification of scarcity still underwrite[s] how we organise our economic life’.

Suzman shifts across centuries as he tells the story of how we spend our time. He illustrates his points with references to individuals, some famous, some anonymous, some like Thadeus, an urban dweller on the outskirts of Windhoek, Namibia. Thadeus’s story illustrates an important development: increased urbanisation, with 2008 a landmark year when more people lived in cities than in the countryside for the first time in human history. But the story of cities goes way back, to the communities built by termites and to ancient Rome where the first guilds were established.

The book is a feat of synthesis: Suzman draws on anthropology, archaeology, economic history and philosophy. He humanises many of the thinkers he quotes, offering snippets about their lives that illuminate or just entertain. For example, he tells us that Sir John Lubbock, the person behind introducing the bank holiday to encourage work-life balance, also tried to teach his poodle, Van, how to read. One person Suzman does not mention, strangely, is Thomas Piketty, the French economist whose work on the concentration of wealth and rising inequality, must have influenced Suzman’s analysis.

When he reaches the recent past and discusses the rise of the consumer society and then the dominance of services, Suzman’s opinions and prejudices rather than scholarly insights come to the fore. He hates management consultants and is scathing about bloated university bureaucracies. In the latter case, his criticism is not accompanied by a discussion about the trend towards demand for higher skills and mass tertiary education. This change in perspective raises the question as to when Suzman’s history of work should have stopped? I suggest in the 1980s when his lived experiences fog up the historical lens.

Most of the contemporary analysis is in Western countries, though Suzman does talk about the Japanese phenomenon of ‘karoshi ’: death by overwork. He also mentions those whose health can be affected by boredom at work, and workaholics. Suzman strikes me as one of these, given the enormous breadth of his canvas and his forensic search for interesting anecdotes. He is, however, ambivalent about ambition as well as affluence. Durkheim’s idea of anomie, a ‘malady of infinite aspiration’, caused by people’s sense of dislocation during the Industrial Revolution, is, Suzman fears, becoming a permanent condition of the modern age.

This has resulted in the blurring of work and leisure, with people finding it more and more difficult to be idle. It is a shame Suzman did not investigate further the consequences of this blurring. But his real omission is inadequate discussion about the individual and social effects of unemployment in modern economies, especially in the time of COVID (which he does mention) when work is proving to be an important psychological as well as economic prop. Indeed, the role of work in building social capital and self-esteem deserved greater attention in this history.

Suzman is now the director of Anthropos Ltd, a think tank that applies anthropological methods to solving contemporary social and economic problems. Work does not provide solutions. We still do not know how to reach the Keynesian dream of valuing ends above means and preferring the good to the useful. Nevertheless, this survey of human endeavour gives us plenty to think about as we navigate the post-COVID fourth industrial revolution and try to make better work for all, with less waste, less carbon and more leisure.