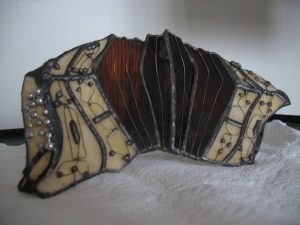 In local dives, musicians carry on the tradition of singing tango, yes, singing. The music and lyrics are as essential as those sexy dance moves. Elsewhere, young Argentinians are bopping to rock ‘n roll or testing out their own songs in soirees hosted in people’s flats.

One aspect of tango lyrics that intrigues me is the incorporation of vesre, a play on words that switches around the syllable of words. So, café (coffee) becomes feca, mujer (woman)/ jermu, amigo (friend)/ gomía, pizza /zapi (which is also the name of a major Argentine pizza chain).

Pity the poor student of Argentinian Spanish! And for that matter of English and its rhyming slang. Like vesre, the tradition of Cockney rhyming slang came out of the working class, people who were traders in London’s markets in the 19th century. Their slang is also confusing, and complicated. It finds an expression that rhymes with another word, which is replaced by that expression, or part of it at least. For example, the word ‘look’ rhymes with ‘butcher’s hook’ but the actual rhyming word ‘hook’ is omitted leaving the word ‘butchers’ to mean ‘look’. In the same way ‘feet’ rhymes with the word ‘meat’ in the phrase ‘plates of meat’, so in Cockney ‘feet’ are ‘plates’, while ‘teeth’ rhyme with ‘heath’, as in Hampstead Heath, so become ‘Hampsteads’. For more on these mind-frazzling expressions – not all obsolete — visit http://www.cockneyrhymingslang.co.uk

Both these versions of wordplay show us how adaptable language is and how people and cultures influence the development of dialects, vocabulary and humour in local communities and beyond. With more than 300 languages spoken in Australian homes, Australian English is, according to Ingrid Piller, Professor of Applied Linguistics at Sydney’s Macquarie University, becoming more diverse. Newcomers don’t just come to terms with colloquialisms, Cockney slang and other word forms, like ‘brekkie’ and ‘barbie’, or weird uses of words like ‘average’ to mean ‘bad’ or ‘mate’ not to mean ‘friend’. They also introduce words from their native languages and create their own versions of English, getting their revenge on the vagaries of English spelling and utter confusion of its slang.

Image: the bandoneon,  an essential instrument in tango and much more complicated to play than the accordion.